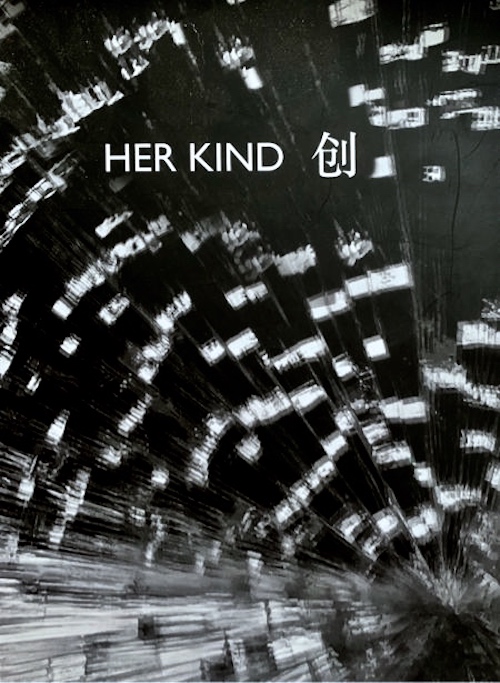 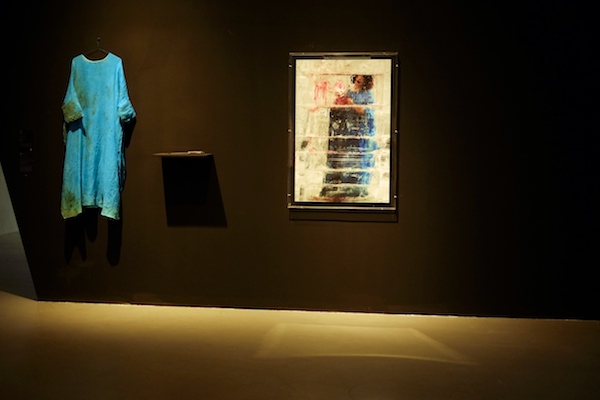 I have ridden in your cart, driver,

waved my nude arms at villages going by,

where your flames still bite my thigh

and my ribs crack where your wheels wind.

A woman like that is not ashamed to die.

I have been her kind.

Opposed to conform to societal norms and unwilling to restrict the self, this kind of women refuse to be ordinary and do what is expected. Xiao Lu, Zhao Yinou, and Cao Yu have been her kind. They may have multiple personas, as daughter, mother, and wife, but more importantly, they are artists. These artists do not submit to gendered assumptions, creating works based merely on feminine characteristics, nor do they blend unnoticed into the privileged male position, following men’s methods and rejecting their female identities. Instead, they find creative drive within their own aggression and destructiveness.

In her 1907 essay “On the Question of Women’s Liberation,” He-Yin Zhen sees nannü (male/female) as not simply a sexual difference but rather a class distinction that is politically demanded to assert social hierarchy. She argues it is this nannü distinction that produces men’s domination over women and should thus be eliminated. However, Chinese women’s liberation rarely originated from their own interests—in Mao’s China, their emancipation was under the illusion of state-authored collective sameness that denies female identity and gender difference, which is nothing but an ostensible disposal of the nannü distinction and another form of oppression. He-Yin’s means of eliminating this distinction in fact lie in the equalization of social customs and education, that if sons and daughters are treated equally, the responsibilities men and women assume would be equal, then the distinctions between “men” and “women” would no longer be necessary. Art making, therefore, should neither sedulously stress gender difference nor deny it, but rise from one’s innate drives. Aggressive impulses belong to both sexes. As Melanie Klein points out, from infancy onwards, one battles with aggression throughout the life span. Derived from the death drive, the infant projects her destructive fantasies on a series of part-objects, starting from the mother’s breast, for example, when it fails to satisfy. Representing the mother, the breast is split into good and bad objects. As the good and bad objects are increasingly synthesized along with the infant’s development, attacking the bad object also jeopardizes the good object that she fears losing the loved object to her own destructive impulses, giving rise to guilt and the wish for reparation. Shifting from the fear for destruction to the fear of destruction, the infant reaches what Klein calls the depressive position, which is regarded as the pivotal point in one’s development. As the aggressive fantasies are part of the feminine psyche that the expression of aggression and destruction is crucial for women artist to voice her true self.

Xiao Lu, Zhao Yinou, and Cao Yu are Chinese artists born in the 60s, 70s, and 80s respectively. Xiao, born in 1962, grew up in the period of Cultural Revolution and experienced the political turmoil of the 70s as well as the Chinese economic reform of the 80s. The oppression of the Cultural Revolution and the complete introspection of this era afterwards caused the 60s generation strongly skeptical and rebellious. If it was not for the extreme ideological confinement of the era that made sex a taboo, Xiao’s “incident” which led to her notorious gunshots would not have happened. Zhao was born in 1972. Linking up the 60s and 80s, the 70s generation received conservative traditional education in their early ages until the influx of Western culture in the 80s. Unlike the rebellious 60s generation, artists born in the 70s focus more on their inner worlds, as Zhao’s paintings demonstrate, exploring more about the unconscious. As for the 80s generation, who has not carried the scars of historical events, are generally more self-conscious and introspective. Under the influence of globalization and the popularity of the internet, the 80s artists, Cao (born in 1988) included, are more internationalized, open to a wider range of mediums and materials. In her video works, sculptures, and installation works, Cao Yu has repeatedly used various types of materials, including breast milk, urine, brassiere, boots, marble, fresh meat, canvas and so on.

The Chinese title of this exhibition, “创“(chuang), has two meanings, that it stands for “创伤“ (trauma), on the one hand, and “创造” (create), on the other. Xiao and Zhao have both experienced trauma and loss in their teenage years. According to Klein, a traumatic experience reactivates the infantile fear for destruction, which mobilizes defenses that project aggression outwards onto external objects. However, restricted by social customs, women often fear engaging aggression as it places them outside the accepted female identity. As a result, destructive impulses are turned against the self, as shown in Xiao and Zhao’s works. Whereas Cao, growing up with less restrictions owing to China’s reform and opening-up, is able to take control of her aggression and accept it as part of her creative drive. Expressing her destructive fantasies freely, Cao’s works assault the viewers not just visually as Zhao’s paintings do, or as Xiao’s performance irritates the viewers both visually and aurally, but rather with senses of seeing, hearing, smelling, and touching comprehensively. Furthermore, Hanna Segal makes a direct link between the wish for reparation and the creative impulse. As the loved object is destroyed by one’s destructive fantasies, one feels the need to recreate it, and what every major artist does, as Segal observes, is recreating a world.

Many Chinese women artists are so used to focus their artistic practices on traditionally accepted women’s subjects, such as the flowers, embroidery, and the harmonious domesticity that they unconsciously identify with the social constructed female identity and take this “otherness” as the true self. Always part of the feminine psyche, aggression and destruction are powerful sources of creative drives, indisputably crucial to feminine creativity. As Sabina Spielrein has noted, “no change can take place without destruction of the former condition.” To break the taboo and change the fixed perceptions of women and women’s art, one must actively and consciously challenge the gendered assumptions of female creativity within the patriarchal structures, and undoubtedly, through destruction and recreation.

11.  Miller, the Creative Feminine and Her Discontents: Psychotherapy, Art, and Destruction, 76.